A visual guide to how Docker works

The goal of this article is to gain a visual mental model of how docker works to be able to use it properly. This article doesn’t teach how to use docker.

Warnings: This article focus on Linux, and may include inexact assumptions

The docker engine is a client-server app written in Go. It is made of 3 parts: 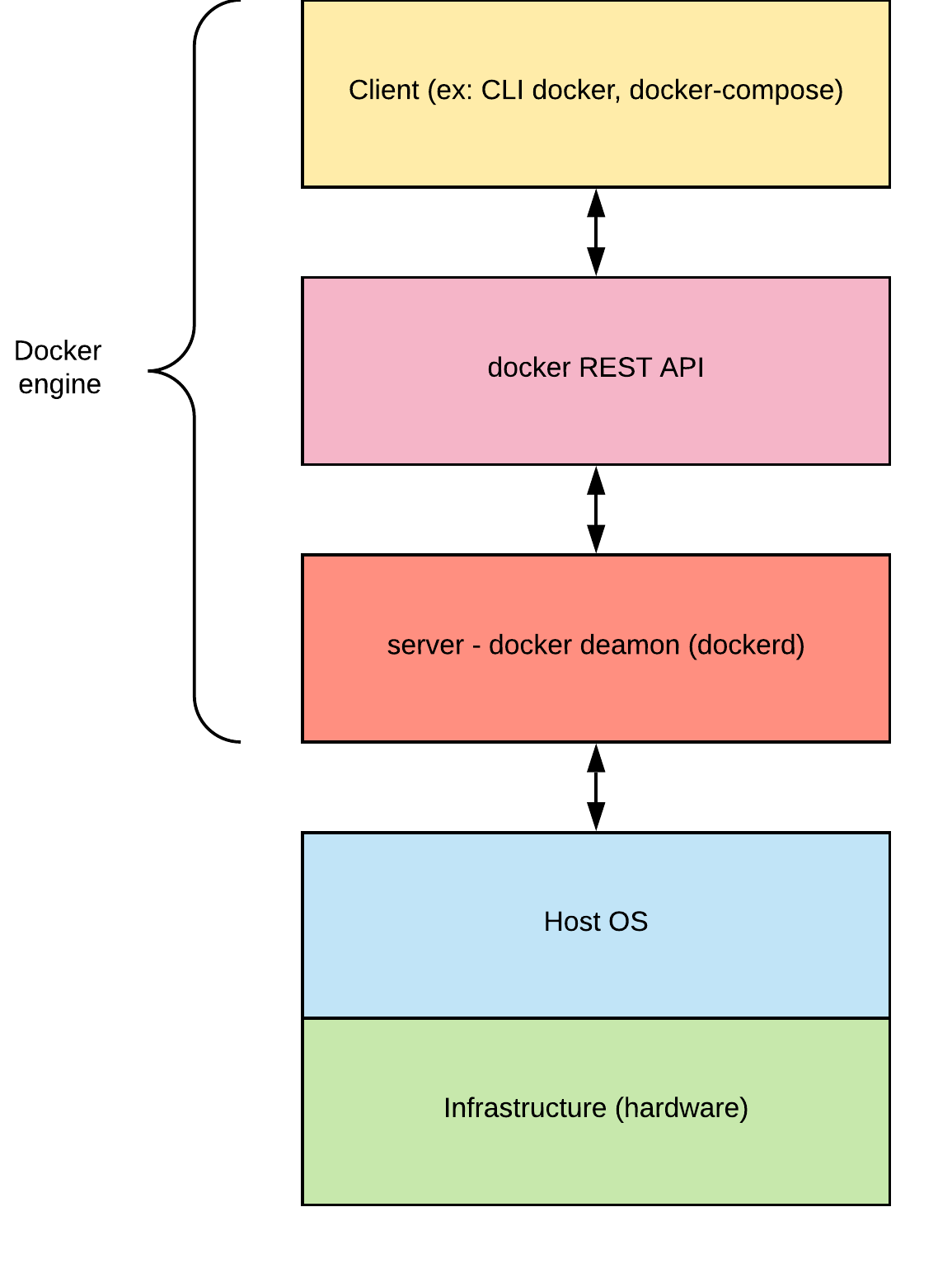 The goal of docker is to run applications in an isolated environment. Each application can behave like it’s running on its own finely tuned machine. Docker containers give the same advantages as virtual machines without requiring to install a full operating system (OS) with a kernel. Instead, Docker containers share the same OS kernel, the one installed on the host machine (unless the host is windows?).

The kernel is a software that provide an abstraction layer of the hardware. The kernel defines how processes, threads, memory, files, networking… work. Every time a program on a computer needs to interact with the hardware, it will make a system call to request a service from the kernel.

The Host OS, also called container host, is the OS on which docker clients and docker deamons run. The host OS shares its kernel with running docker containers.

Contained or Base OS

The contained or base OS refers to an image that contains an “OS” (ex: Ubuntu, CentOS, alpine, windowsservercore…). 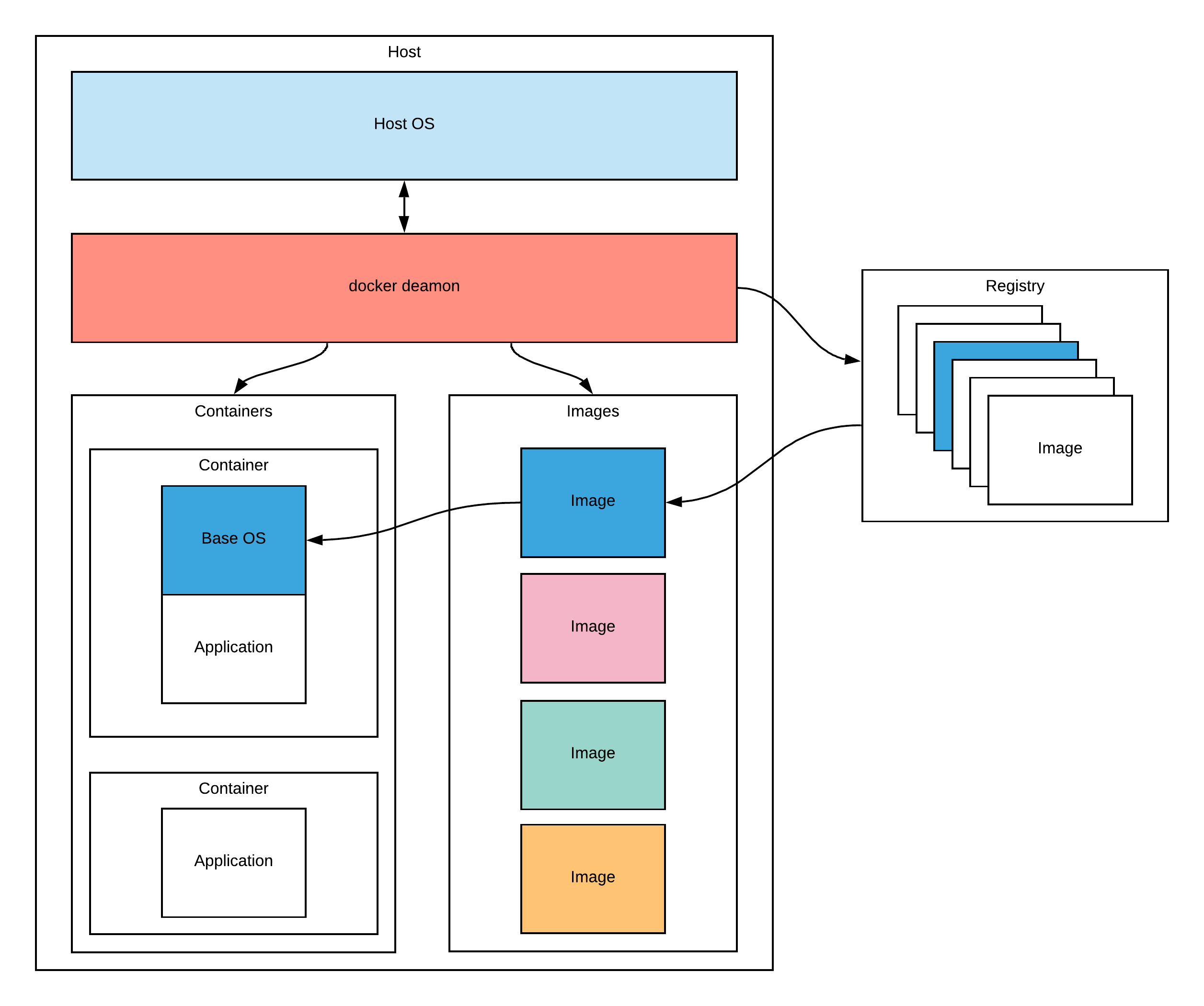 An image is a read-only template with instructions for creating a Docker container. Images are usually based on another image. You can create your own image using a Dockerfile or by downloading other images in a image registry like Docker hub.

Images are made by executing instructions of a Dockerfile. A Dockerfile is just a regular text file that tells the steps to take to create an image. Each instruction in a Dockerfile creates a layer. Layers are also called intermediate images.

Consider this simple Dockerfile to run a NodeJS server:

It will create the following layers: 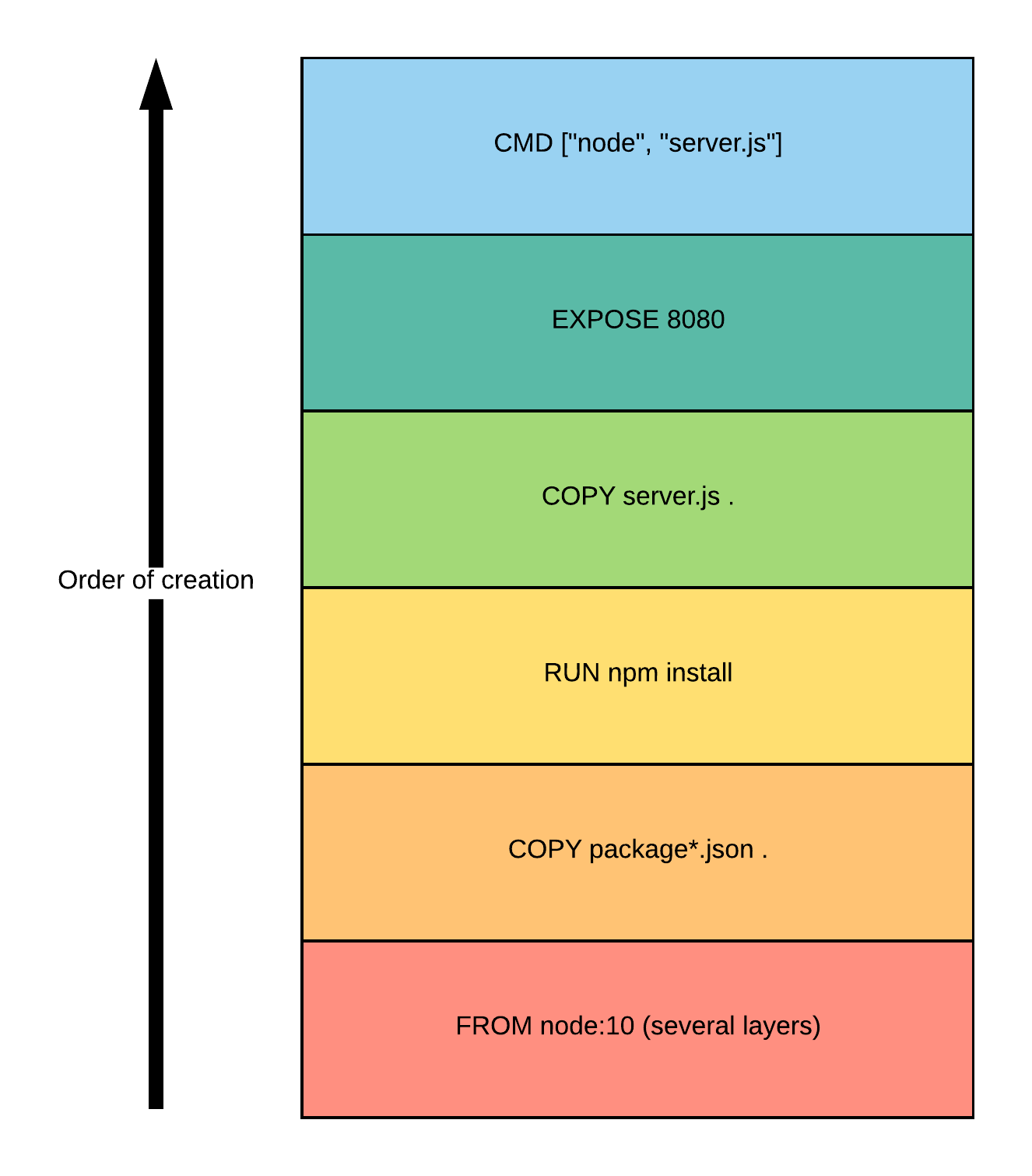 A layer is like a “commit” of the filesystem. A file (or directory) can be added, deleted, or changed in a layer. If a file is created in a layer and modified in another, the entire file will be copied into this layer. So if a file is deleted in a layer, it will still exist in all the previous layers where it existed. 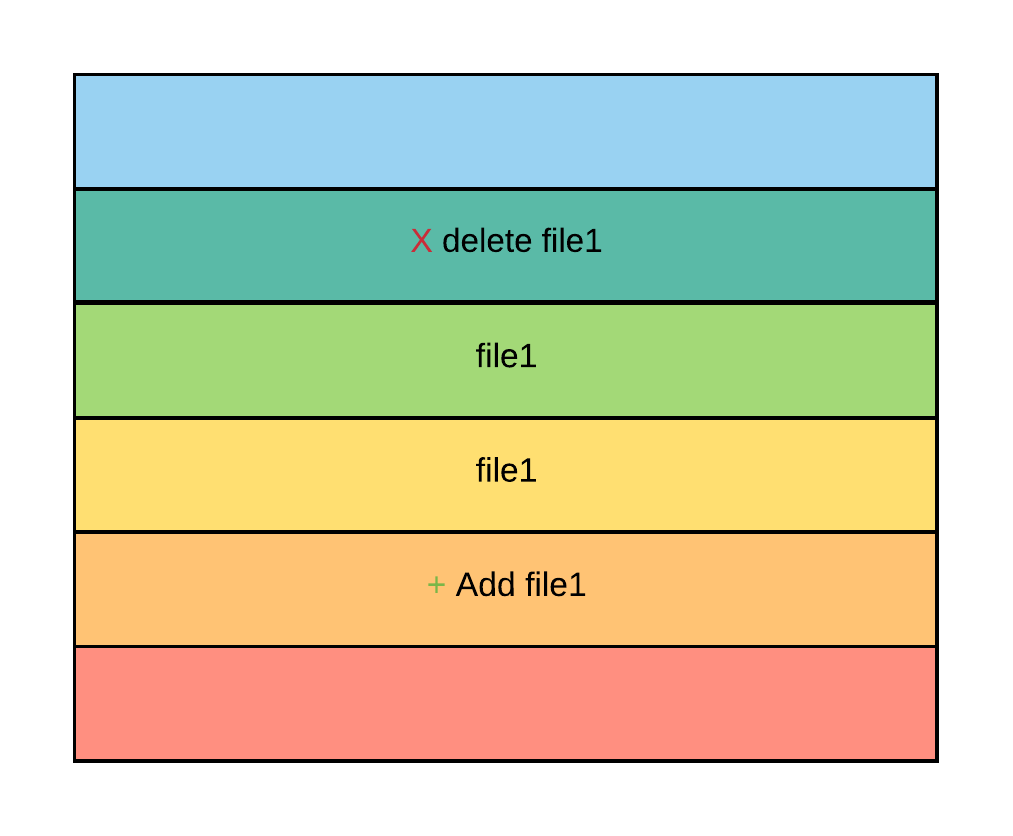 Layers are read-only and uniquely identifiable, which allows to share them across images. An image contains reference to layers, so several images can share the same layers.

The reason why you should care about layer is because the order in which they are created can increase or decrease the build time. If we go back to our nodeJS example, if we had written:

Then everytime we modify a source file, docker will have to re-run npm install, and re-build a layer containing the massive node_moludes directory.

A container is a runnable instance of an image. We can create, start, stop, move, delete a container.

When a container is created, the container stacks its own read-write layer on top of the image layers. 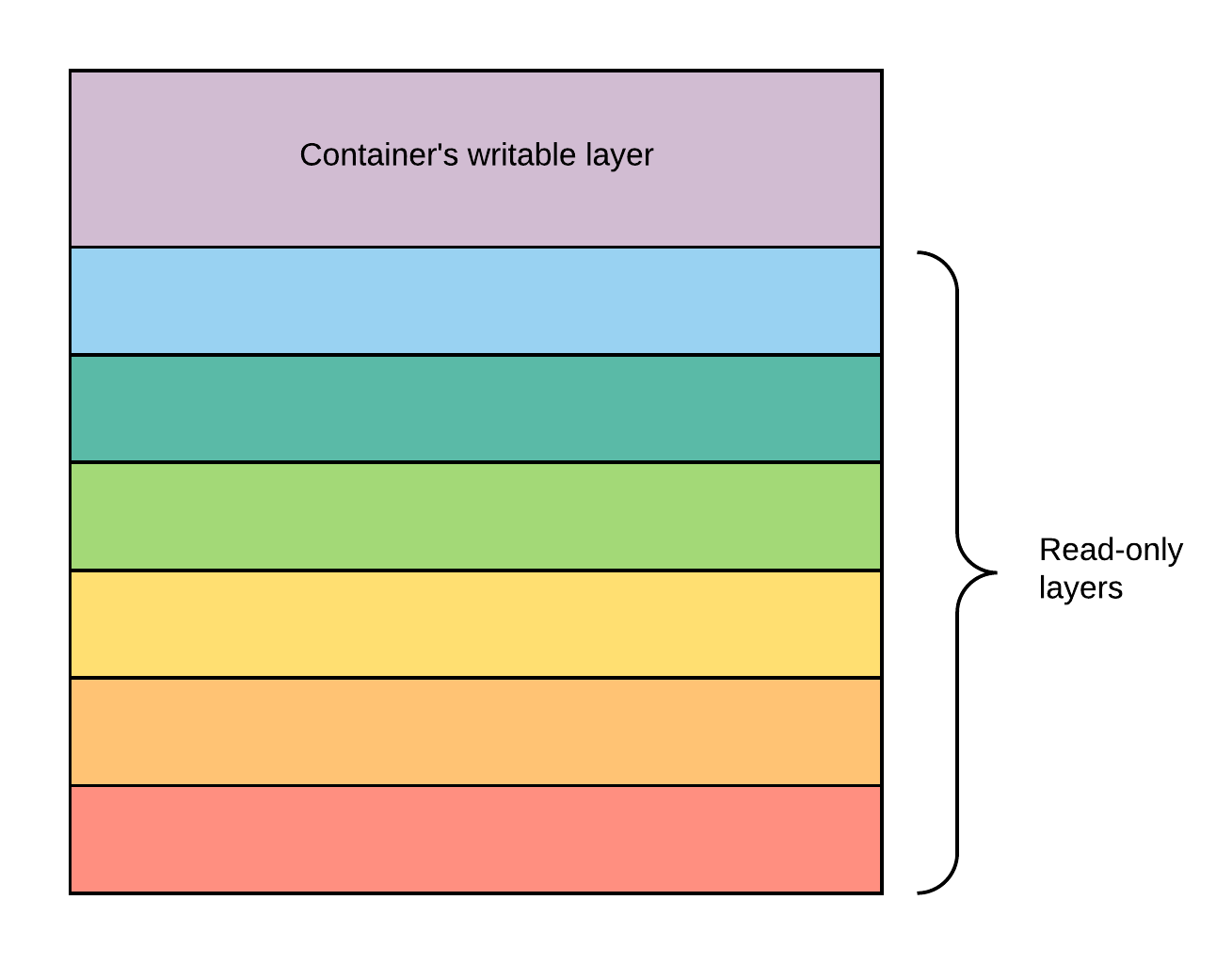 Every read of a file goes down through the layers until it finds the file, or finds a layer that marked the file as deleted, or does not find the file. Every write will copy the file up to the writable layer before making changes to it. 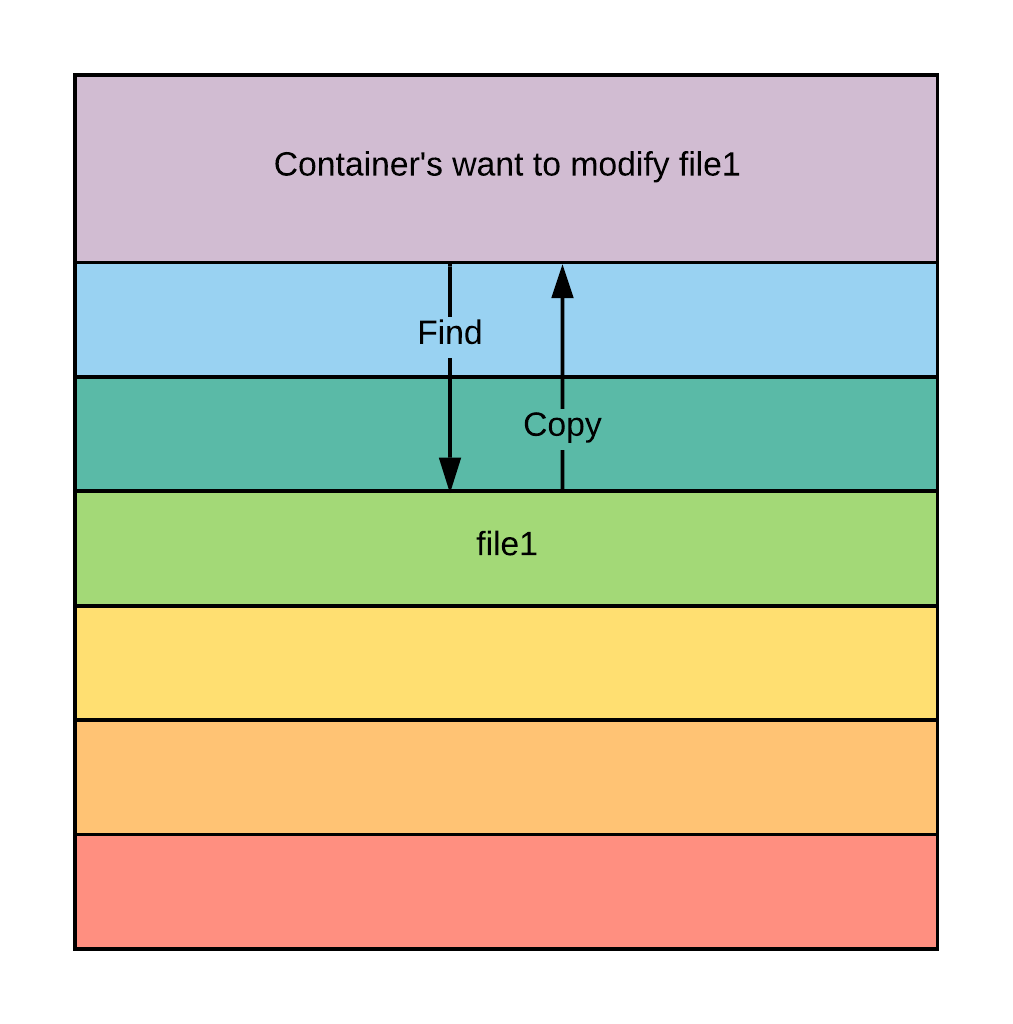 Services allow us to scale containers across multiple Docker deamons, which all work together as a swarm with multiple managers and worders. TODO